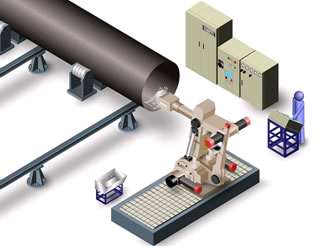 This system performs paint dot marking characters, symbols and special marks at the designated position of inside and /or outside surface of large diameter pipe in accordance with the data received from host computer.
The marking head, attached to the tip of robot arm, moves circumferential and longitudinal direction on the surface of the pipe to perform marking.